Leeds United failed in an attempt to sign Porto midfielder Otávio, according to reports from the Portuguese media.

Newspaper Record writes that the Elland Road side placed a €30m offer to land the player, and that was turned down by the Dragons.

The outlet writes that Leeds are looking for ‘reinforcements of weight’ to ‘renew their domestic ambitions’ following a season where they had to fight against relegation.

Still, they point out that more is needed to take Otávio from Portugal.

It’s said there’s an ‘indication’ that the midfielder is only leaving the Dragons this summer if someone shows up and triggers his release clause, which stands at €60m. 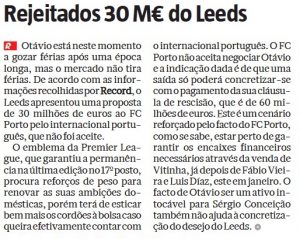 Record claims Porto is in no huge need of money, as after selling Luis Diaz to Liverpool in January, they also negotiated Fabio Vieira’s transfer with Arsenal this summer and are sorting a deal for Vitinha to head to Paris Saint-Germain.

So with Otávio being an important player for the team, the newspaper says it ‘doesn’t help’ Leeds’ attempt to sign him.

On Wednesday evening, website Mais Futebol claimed Porto received a €30m offer from Aston Villa for the player, but today, outlet O Jogo claims to have learned that it was actually from the Elland Road side.