With Sport going head first back into the Philippe Coutinho circus on Wednesday, there’s several articles all with their own claims.

The headline and front page story from Sport is that Barcelona players are backing the potential transfer, and the club are going to do their best to get it done.

Another article focuses in on FSG, and a more flexible approach from the Liverpool owners. It’s explained that FSG aren’t insisting their €150m asking price is paid all in one go.

They’ll allow a main fee topped up by bonuses, which presumably would be pretty much nailed on. Sport call this ‘deferred’ payments, allowing Barcelona to spread the cost over a period of time.

‘Agents and relatives’ of Coutinho are said to have secured this after ‘comings and goings’ in Boston, and it’s acceptable to FSG. 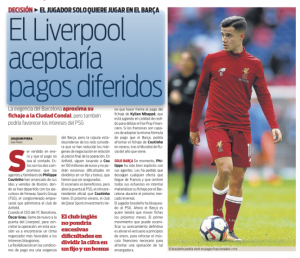 Sport claim that when Barcelona’s Òscar Grau returns to Liverpool to finalise a deal he’ll find a more ‘favourable’ situation than last time, thanks to the word from Boston that deferred payments are acceptable.

PSG would also prefer deferred payments, explain the Catalan newspaper, but Coutinho has his heart set on moving from Liverpool to Barcelona.