Paris Saint-Germain registered a 2-0 victory over Manchester United at Old Trafford in the Champions League earlier this week.

Thomas Tuchel replaced Angel Di Maria with right-back Colin Dagba in the final quarter and the latter made his debut in the competition. L’Equipe reports that the German manager brought him on because he knew the defender would follow his instructions very well.

So far, the 20 year old fullback has made seven appearances in all competitions, which includes only four starts.

Limited playing time saw clubs make an approach to take the Frenchman in the winter marker and one of them was Southampton.

The Saints ‘applied for a loan’ to sign Dagba until the end of the season, but Southampton’s request was turned down by PSG.

Dagba’s agent Patrick Glanz is delighted that his client decided to continue with the Ligue 1 winners. 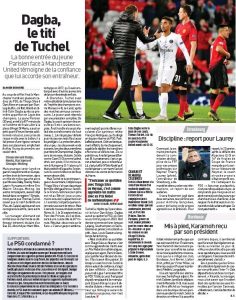 “Practicing daily with Thiago Silva or Neymar is like learning math with a Nobel Prize winner in mathematics,” Glanz said.

“You have to be patient. And when a coach like Tuchel gives you so much confidence, it’s about thinking well. How many Ligue 1 players would like to be at the PSG? Colin is there… maybe one day he will become a regular.”

It was worth a try for Southampton.