With Manchester United needing some extra midfield depth, the name Tanguy Ndombele has made recurring appearances in transfer stories, for good reason.

Originally loaned from Amiens before his transfer was made permanent, the Lyon midfielder has caught the attention of many teams, and like most Ligue 1 players (apart from Paris Saint-Germain ones), it only a matter of time before someone swoops in with too much money to refuse.

Despite Lyon trying their best to avoid selling, there comes a point when players like Alexandre Lacazette want to try something new, and Tanguy Ndombele, at one point, will likely feel the same.

The question remains, where will he go?

Speaking to Tuttosport, his manager, Bruno Génésio, believes Juventus would be a good option for him going forward, claiming he ‘wouldn’t be surprised’ if Ndombele ended up in Turin. 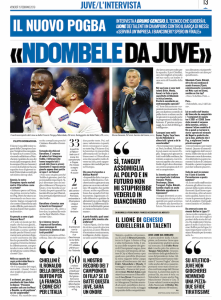 Asked why his player was so special, he said: “He’s strong physically and especially technically. Tanguy can leave three players behind with his first touch, and when he sets off, it’s hard to stop him. He’s precise in his passing, good at dribbling and is very intelligent”.

He continued: “I don’t like comparisons, but, yes, Ndombele could be a new Pogba. Tanguy can play in every midfield role, he’s started to score, but I want him to improve there: he needs to be an 8-10 league goal midfielder.”

For him, there’s no doubt the reported Manchester United target, and their interest is report again by Tuttosport, will ‘become a midfielder in a top club’, which is where he mentions Juventus as a possible destination.

Of course, his main wish would be for the midfielder to stay at Lyon for a little bit longer, but if someone like the Red Devils, or Juventus, come knocking with an amount close to what was paid for Pogba, we can’t see Jean-Michel Aulas turning that down, as stubborn as he is.