On Thursday evening L’Equipe reported Nabil Fekir to Liverpool was all agreed. Despite the story breaking in France, it was made clear by L’Equipe that they’d got the information from their own English sources.

Lyon then completely denied the information, which wasn’t especially unusual, and then came a whole lot of speculating as to why. There were suggestions of big fluctuations in Lyon’s share price due to the deal, but this was complete nonsense, the club’s share price couldn’t have bee much calmer.

Then there were claims the deal couldn’t be announced until the evening and after the French stock market had closed, and again this was nonsense. Similar has been peddled previously about Manchester United and other clubs, and transfer window financial experts manage to push forward all kinds of regulations.

As transfers go, it’s not the type of share price impacting business development which requires such thought. But, yet, as it happened with United and others it will continue to happen with Lyon.

The evening came and went and there was no announcement from Liverpool. Fekir himself, with the rest of the squad, flew from France’s Clairefontaine training centre to Lyon, where the country face the US tonight, and arrived at midday.

There were claims from RMC that he’d undergone a Liverpool medical the night before.

Saturday’s edition of L’Equipe has a look at the situation, and it’s telling they don’t touch on the shares. The French newspaper, who it’s worth remembering broke all this on Thursday, reiterate Liverpool and Lyon found an agreement on the transfer Thursday night.

For the delay, it’s stated while it’s ‘officially unknown’, ‘some sources spoke of a financial disagreement in Nabil Fekir’s camp’. 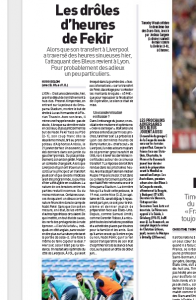 From the English perspective, L’Equipe got an ‘It’s crazy’ comment. Interestingly, the French newspaper suggest Lyon’s problem with the claims wasn’t generally about a transfer, but the €65m figure which then started to circulate.

The player’s entourage were either optimistic or quiet when L’Equipe tried to contact them, with someone close to Fekir being quoted as saying “It’ll get better” on Friday night.

It’s stated Liverpool’s Barry Hunter, ‘one of the major players’ in this transfer, turned up in Lyon yesterday and that could be to help get things over the line.

RMC speculate that because the French transfer window opens today, it couldn’t be announced before, but that doesn’t seem right. The transfer window is really just a registration window relating to when players can be registered to play in certain competitions, it’s perfectly fine to sign players outside of that period, financially listed or not.

Then there’s the speculation that Lyon may be waiting until July 1st so the money counts on next year’s accounts, but if it’s all already agreed then that looks like a manipulation. Given everyone has suddenly become experts of the French stock market they should probably know there’d be an issue with that.

If Lyon wanted to delay until July, they’d have to refuse to fully agree a deal until that time.

Fekir to Liverpool could be announced in the next few hours, it could be before he travels to Russia, there’s clearly a hope for that but no clear information it will be. Primarily, the current Lyon player has to hope to get minutes for France tonight, at his home ground.

L’Equipe say Fekir has bought as many tickets as possible for family and friends. This is just us getting into the theme of speculating, but with all the crazy reasons being pushed forward at the moment, perhaps there’s a chance he just wants to still be a Lyon player this evening, just for this match.

There will be a reason for Hunter flying over, and it’s likely to either be related to the Fekir camp or Lyon and their owner Jean-Michel Aulas. As for the claims regarding an issue with Fekir’s knee, there’s absolutely no mention of that from L’Equipe.