Sometimes there are rumours which are quite hard to look into, because, frankly, the player isn’t known.

Saturday’s edition of L’Equipe reports Wolves have made a proposal to sign Imrane Bouchema from Tours.

The French newspaper doesn’t really add a lot to the claims, and their entire article is: ‘STRASBOURG AND WOLVERHAMPTON DISPUTE BOUCHEMA – Finalist of the Gambardella Cup with Tours this season, Imrane Bouchema should leave his training club, relegated to National. The young central defender (20) received proposals from Strasbourg and Wolverhampton, promoted to the Premier League. Bouchema is free after the end of his amateur agreement.’

There’s nothing else across the French media over the past 24 hours about the player, and the only profiles list Bouchema as being 18 years of age rather than 20. That would make more sense given his status on an amateur contract and Wolves interest. 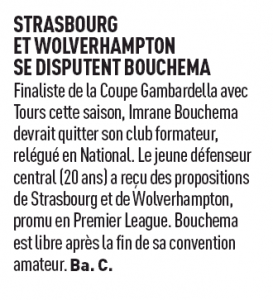 The Premier League club may have expected a youngster to move on further by the age of 20.

Jorge Mendes doesn’t seem to have any connection in this one, and Bouchema interest would appear to a product of some scouting with a rather wide net.

The youngster can now choose from the proposals he has.