Marcos Rojo is currently preparing for the World Cup with the Argentina national team and is expected to play a meaningful role for his country in Russia.

Despite starting just 8 Premier League games for Manchester United last season, it wasn’t a shock that Rojo was named in the national squad, and Jorge Sampaoli clearly trusts the defender.

As the English season was coming to a close, Rojo was concerned that his good standing within the Argentina set-up would come into question if he couldn’t prove himself for Manchester United, so he had a chat with Jose Mourinho.

Ole quote the player as saying: “I cannot blame him, but at the end of the season, with fear, I went to talk to him and I tried to ask him what was going on. He told me there were several in situations similar to mine. And he was going to put the one in who was better.” 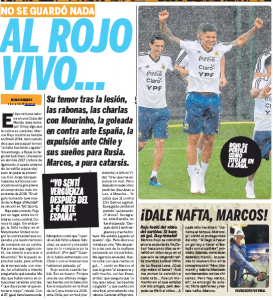 The chat didn’t seem to help much and Rojo only got two games for Manchester United between February and the end of the season.

Rojo also revealed another chat with Mourinho: “When the club signed Alexis Sánchez, he came up and asked me not to break him in practice.”

It’s explained by Ole that Rojo has a history of run-ins with Sanchez for both his club and country… Mourinho was clearly worried.