Olivier Ntcham joined Celtic from Manchester City last summer, prior to which he spent two seasons on loan at Genoa.

The 22-year-old midfielder joined the Premier League winners’ academy from Le Harve in 2012. He spent three years in the youth setup and was coached by former Arsenal and France midfielder Patrick Vieira for two years.

Vieira is expected to take over at Nice this summer, and Celtic’s Ntcham gave an insight on the 41-year-old’s training methodology.

“How would you define the game that he wants to put in place? He has a very clear idea of the type of football he wants. Vieira is really like a Spanish coach,” Ntcham told L’Equipe.

“He has this philosophy. Even in City’s academy, we played like that. He simplifies the game with the ball, with short circuits and repetition in a tactical environment setup. But it goes in the short game first.”

Ntcham also stressed what made his compatriot standout when compared to other coaches during his career.

“A lot to the basic game. After that, it is a lot in the tactical aspect also. With the defenders and midfielders in particular. He gives more freedom in the front. 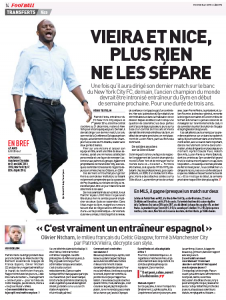 “For us, the circles, there is much in the middle, the first touch, the position of the body relative to the ball. I’ve had a lot of coaches, but, in the game, Vieira is the one under whom I took the most pleasure.”

That may not please Celtic manager Brendan Rodgers too much, but Ntcham clearly feels he spent a worthwhile time with the soon to be Nice manager.