Former Liverpool player Philippe Coutinho has been getting some Barcelona sightseeing in as his teammates prepare to face Chelsea in the Champions League.

Coutinho represented Liverpool in the same competition this season and is therefore not allowed to appear for his new club.

The Brazilian has lived in Barcelona previously, when on loan at Espanyol from Inter Milan. Unable to establish himself at the Italian side, Coutinho went to Spain for half a season, did reasonably well, before returning to Inter and then moving to Liverpool.

Visiting Sagrada Família, Coutinho parked in a loading bay, report Catalan newspaper Sport, and when he returned to his Audi Q7 it was being towed away by the local authorities. 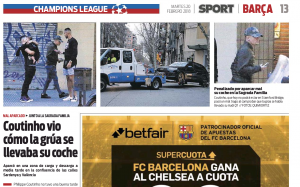 Sport say Coutinho ‘left his car badly parked on Sardenya Street’ and ‘the municipal crane took it to the vehicle depot’.

The former Liverpool player ‘couldn’t hide his anger’ and then had to check where his car had been taken to, before taking a taxi to the car depot still in ‘visible anger’.