When it became clear Jose Mourinho would be taking over at Manchester United, even when Louis van Gaal was still in the job, there were countless stories about Juan Mata subsequently leaving.

Mourinho had pushed Mata to the side at Chelsea, which led the Spaniard to Old Trafford, and there was an assumption the same would happen at Manchester United.

As is often the case, those assumptions were presented by sections of the media as something rather more concrete, but the reality was very different indeed and Mata and Mourinho have lived cordially at Carrington.

But the footballer is still, understandably, asked questions about the relationship.

Speaking to Mundo Deportivo, Mata was asked his reaction when Mourinho took over: “I faced it naturally. It’s true I received calls from concerned friends and family but I knew that I didn’t have any personal problems with Mourinho at Chelsea. What hurt me is that they spread rumours and lies about what did not happen.”

The Manchester United player believes people don’t get the full picture of his manager: “People know about Mourinho what he wants. We have to keep something of our private life aside.” 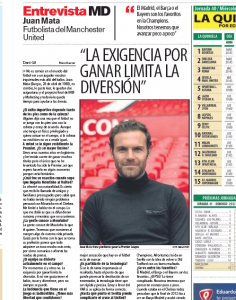 Mundo Deportivo wanted to know if Mata and his teammates currently have fun on the pitch: “At times yes and others no. The demand for winning limits the fun. I like to have the ball, touch it and have fun, but it is not always possible.”

Asked if he has freedom on the pitch, Mata explained: “Mourinho leaves us who play behind the striker to define the freedom. If we lose the ball we have to recover it, but he’s a trainer who counts on the football player’s intuition.”

Mata also explained to Mundo Deportivo that he keeps an aim to win the Premier League, having so far missed out at both Chelsea and Manchester United, and hasn’t lost hope of being called up for the World Cup.