Oriol Romeu always comes across as a sensible and down to earth guy when giving interviews to the Spanish media. The former Barcelona and Chelsea player has been in the spotlight since a young age, and handles it all very well.

With Chelsea facing Barcelona tonight in the Champions League, Marca managed to get a chat with the midfielder, and whilst they asked some questions about the match, most of the answers were relevant to Southampton.

Marca put it to Romeu that he’s having a difficult year with his club, and the Southampton player responded: “We are trying to get the results with the team. We have a hard time leaving the area below. Winning three or four matches in a row is very difficult. We have ten finals ahead. It’s all tight and it’s not easy.”

Looking on the bright-side, the Spanish newspaper then tell Romeu that at least he’s got the regularity in a team that he spent so long looking for: “Yes, this is my goal. To be able to play regularly, have minutes and enjoy playing. I’m happy and now it’s a matter of helping the team to get out of the situation.” 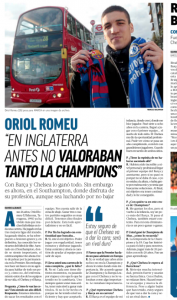 Asked whats missing from his career, the 26 year old said: “I don’t know. Each person has different moments, it goes through stages and if I’d known what I’d have I wouldn’t change it. You always want to be higher, have more level and earn more titles. If I have not done it, it’s because I have not had enough level and you have to accept it.”

That’s Romeu being quite harsh on himself, there’s still time for the Spaniard to move up a level and fight for trophies, and also play in Europe with some regularity. But first he needs to help Southampton survive, because relegation wouldn’t look great on his CV.