On August 2nd, Mundo Deportivo explained negotiations between Barcelona and Real Betis for Junior Firpo have ‘significantly cooled’ after the Seville club demanded a €25m fixed fee plus variables for the left-back.

Sport‘s report from Saturday brings optimism the deal could be take shape, even though two clubs are yet to agree a deal.

Betis take it for granted the defender will not be at the club for the new season. It’s claimed the ‘final agreement’ could be ‘matter of hours’ away, to the point that if things go well, the transfer could be concluded before Monday.

Barca have found an agreement with the player for a five-year deal.

Meetings to sign the fullback have intensified and the last one took place on Friday.  The La Liga winners will pay a fixed fee which will be in excess of €20m, but below €21m.

Sport state the crux of the issue will be to decide the variables. There is still an economic obstacle to seal the transfer. 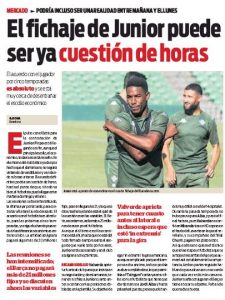 The newspaper further warns that until Junior’s move to Camp Nou is formalised, there will always be a risk of the deal collapsing.

Ernesto Valverde is pressing Barcelona to complete Junior’s transfer as soon as possible so that he can have the player under his command.