Xherdan Shaqiri has made only 18 league starts for Liverpool since he joined them from Stoke City in 2018 and 11 out of them came in his debut season at the Merseyside club.

When the Reds announced the deal, it was confirmed the winger has signed a ‘long-term contract’ with the club.

Earlier reports indicated the 29-year-old’s current deal expires in 2023, but he has now confirmed he has entered his final year of contract at Anfield.

“It’s true, in 2018 I signed a four-year contract,” Shaqiri said during an interview with Corriere dello Sport.

Lack of game time and the contract situation has convinced the former Bayern Munich man to look for a new challenge this summer. Luckily for the Switzerland international, he has received an approval from Jürgen Klopp’s side to find a new club.

“The important thing at this moment in my career is to be able to play regularly, but that hasn’t always been the case in the last three seasons,” he explained.

“This is why I told Liverpool that I feel ready for a new challenge. They accepted my wish and will seriously consider the offers that will come. They will not hinder me.

“I’m only 29, I’ve played in some of the best leagues in Europe and I’d like to continue to be part of them. I am not yet thinking about the end of my career, it is a future that I imagine far away, we will see what destiny has in store.”

“I have no direct conversations; my team of consultants are in charge of the market. They inform me when there are clubs interested, you have to ask them for the names.”

Shaqiri had a spell with Inter Milan in the past and even though it wasn’t a successful one, he is willing to return to Serie A.

“Of course. Who is not in love with the Italian lifestyle, with Italianness? What is really striking is the Italian love for football. It is life in Italy. The fans are incredible,” the Swiss player added.

“I think it’s not just my opinion that football in Italy has developed substantially in recent years.”

“The victory of the European Championship is there, that testifies to it, a well-deserved result. Just take a look at how many Premier League players have been transferred to Serie A.” 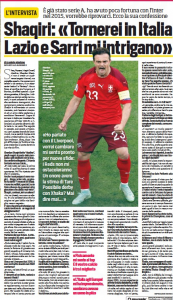 When directly quizzed about the rumours linking him to Lazio, Shaqiri opened the door to joining them, since Maurizio Sarri’s style of football would suit him.

“Igli Tare has been doing an excellent job at Lazio for years. If it is true that he has a great respect for me, I am honoured. I’ve been following Lazio for a long time, it’s a top club,” the Liverpool man stressed.

“In general, also due to my characteristics, I like to play more offensive football and Sarri practices it. It would be intriguing.”