Having signed Victor Moses to cover the right-hand side of his three at the back formation, Antonio Conte would like someone other than Ashley Young (who has performed well) to help out on the left.

That’s why we’ve seen Inter’s name linked with a couple of left-backs recently, including those at Chelsea.

It makes sense, after all, as Antonio Conte has worked with Marcos Alonso before, bringing him to Stamford Bridge from Fiorentina when he was in charge at London, while Emerson Palmieri knows Serie A well from his time at AS Roma.

In fact, it’s stated in Wednesday’s Corriere dello Sport that both players are of interest to the Italian manager, with Inter ‘courting’ the Spaniard ‘for a long time’ in January, only to be swatted away by Chelsea through their ‘exorbitant’ demands.

Since Alonso is higher up the pecking order than Emerson Palmieri, it simply makes sense for the Milan based side to turn their attention to the Italy international, who is ‘easier’ to take away. 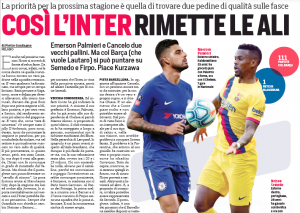 However, Corriere point out his valuation remains hefty for Inter, as they would need to spend somewhere in between €20-25m to convince Frank Lampard and co. to part ways with him.

It’s going to be a long summer for Chelsea, it seems, because Conte isn’t the only one keeping an eye on Palmieri, with reports earlier this week explaining Maurizio Sarri wouldn’t mind a reunion with the 25-year-old either.