Outlets from the English media have been claiming José Mourinho wants the defender at the London side, and could take advantage of the Coronavirus crisis to sign him for less money than otherwise.

But a reaction from newspaper Record is worth pointing out today.

After seeing a report which says Tottenham will try to get a deal for €45m, they write that this will not be enough to convince the Benfica president Luís Filipe Vieira to sell Dias. 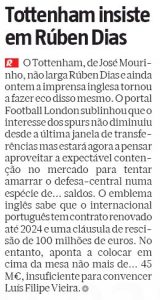 They recall that Ruben Dias has a renewed contract, now protected until 2024 with a release clause of €100m.

Ruben Dias has been linked to several English sides for the past few years, and the fact that he’s now seen as Benfica’s biggest star makes him an expensive player.

The Eagles will make big demands and end up accepting less money in the end, so perhaps it’d still be worth for Tottenham to make an attempt and see how far the Lisbon side can go.