Friday’s Portuguese newspapers were full of claims on the potential transfer of Bruno Fernandes to Manchester City.

That carries on to a certain extent on Saturday, although things are a little calmer.

O Jogo have an interesting article on the situation, and they claim Sporting director Hugo Viana has been in negotiations with Txiki Begiristain, but things aren’t limited to Bruno.

It’s claimed there’s a possibility the two clubs could sign a cooperation agreement, which would see two to three fringe Manchester City players head to Sporting on loan deals.

The Premier League club would then look to have preference when it comes to signing youngsters from Sporting’s excellent academy.

That is said to be where the ‘greatest interest’ is for Manchester City. 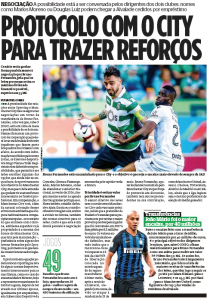 Names such as Marlos Moreno and Douglas Luiz are thrown in as possibilities, and O Jogo say ‘it’s a fact’ that talks about this potential relationship are ongoing at the same time as Bruno negotiations, with the matters obviously linked.

Manchester United offer for defender ‘didn’t even deserve a response’ –...