For more than a month now, Manchester United’s Paul Pogba has been heavily linked with a move to Real Madrid.

The midfielder’s brother Florentin Pogba gave an interview to today’s AS, where he said “things are going to happen” when asked about the World Cup winner’s future at Old Trafford beyond this season.

That’s not the only story the Spanish newspaper have on the 26-year-old. Journalist Marco Ruiz has written another piece, in which he explains securing the services of the midfielder star is the ‘most complicated signing’ for Los Blancos.

We have mentioned only six names so far and Ruiz’s explain how they could help Real sign the World Cup winner… or United retain him. 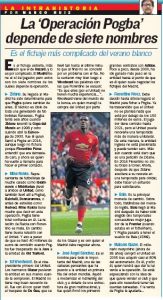 Ruiz explains “Malcolm Glazer: The New York millionaire (now 85 years old) bought United in 2005 after acquiring almost 80% of the shareholding. It is he, and only he, who can give the green light to the operation. He is speculating with the idea that he wants to sell the club and that he will need to have the accounts healthy. And the sale of Pogba would help him…”

Unfortunately, Malcom Glazer cannot have any role in deciding Pogba’s future, because he died in 2014.

We wanted to give Ruiz the benefit of doubt and assume this could have been a result of some sort of a confusion and he could have possibly meant Avram or Joel.

However, Ruiz specifically mentions his age within brackets and says ‘now 85 years old’, which was Malcolm Glazer’s age when he passed away five years ago.

We are not saying Pogba will stay at United or leave Old Trafford for Real Madrid, but one thing is clear… Malcolm Glazer will not have any role in this. 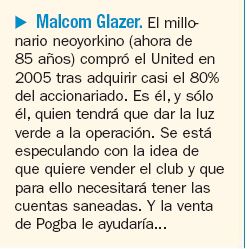 It’s not the first time this has happened.

To be fair, he was right.