On May 3rd, a front page report from AS explained that Real Madrid are expected to spend in excess of €500m in the summer and the ‘most expensive and complicated’ signing would be that of Paul Pogba.

It was also explained the 26-year-old is waiting to see if Manchester United qualify for next season’s Champions League and then he can ‘tighten the rope’ on Ed Woodward.

AS have now interviewed Paul Pogba’s brother Florentin Pogba and asked would it be impossible for the midfielder to continue with the English club without Champions League football.

He said, “I do not know. In football, many things can happen…”

When further questioned, he was asked about Zinedine Zidane’s influence.

Florentin explained: “Today I can tell you something, tomorrow something else…”

And today? “Things are going to happen. Now comes summer. We’ll see if he stays or if he leaves…”

Ole Gunnar Solskjaer’s side are sixth in the table with 65 points, trailing fourth place Chelsea by three points with two games left in this season. 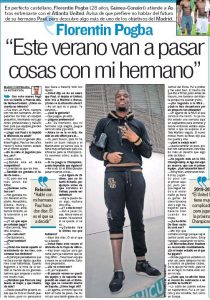 With several reports in Spain indicating that a move away from Old Trafford could be on the cards for the World Cup winner, a failure from the 20-time English champions to qualify for the Europe’s elite club competition may make it difficult for Manchester United to retain the Frenchman.