Home Europe Man United player waiting to see if they qualify for CL, will...
SHARE

On May 2nd, we carried a report from Marca explaining why Real Madrid’s operation to sign Paul Pogba from Manchester United is ‘simmering’.

It was claimed the Red Devils will not sell the midfielder for less than €150m and the overall cost of the deal, including transfer fee and wages, could easily go to €200m, which is expensive for the 13-time European champions.

The World Cup winner is on the front page of Friday’s edition of AS as it’s claimed Los Blancos are planning to spend around €540m for seven players, including the 26-year-old to strengthen the squad for the next season. 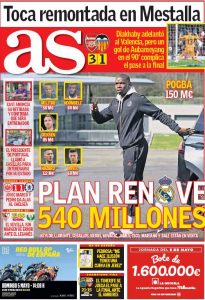 The La Liga outfit’s predicted budget for the summer could be more than what was collectively spent in the last five seasons.

Regarding the former Juventus man, AS explains the ‘most expensive and complicated signing’ will be that of Pogba, who is one of Zidane’s goals in the summer.

Pogba is waiting to see if Ole Gunnar Solskjaer’s side will qualify for the next season’s Champions League so that he can then ‘tighten the rope’ with Manchester United’s executive vice-chairman Ed Woodward. 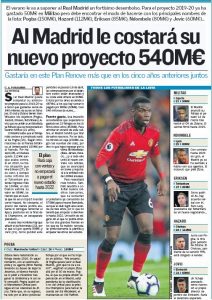 The report also suggests for Real Madrid to spend big in the summer, they will have to raise cash by offloading a few of their current first team players.