Zinedine Zidane was reappointed as Real Madrid manager in March, just days after they were knocked out of the Champions League by Ajax.

Ever since he returned to the Spanish capital club, reports linking Manchester United’s Paul Pogba with the La Liga club have increased.

Marca now claims the French coach’s ‘obsession’ is to close the World Cup winner’s signing as soon as possible and he is pressurising Los Blancos to grant his main wish.

Chelsea’s Eden Hazard is another key target for the 13-time European champions and their efforts to sign the Belgium international are in full swing, but the operation for the Manchester United midfielder is ‘simmering’.

In the offices of the Santiago Bernabeu, they know the 26-year-old wants to leave Old Trafford in the summer. However, the operation to complete his transfer is not simple for various reasons.

The main obstacle will be the overall cost of the deal as it could easily go to €200m, including the transfer fee and the player’s salary, which Real Madrid are unwilling to spend on the midfielder. 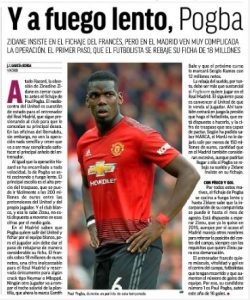 He is currently earning a net salary of €18m with the Red Devils and those figures are ‘unattainable’.

For Pogba to play for his supposed dream club, he will have to take a substantial pay cut.

Marca’s report further explains Ole Gunnar Solskjaer’s side are unwilling to sell their star player for anything less than €150m. This is still excessive for Real, but they could reach it if the pay-cut is accepted and Zidane ‘insists’ on the signing.