Gerard Deulofeu is open to the idea of continuing at Watford after admitting that he is not looking to return to Barcelona, reports Sport.

The 24-year-old, who came up through the ranks of the Catalan club’s famous academy broke into their first team in 2011. After failing to cement his place in the starting lineup, the Spanish champions allowed him to go out on loan – to Everton and Sevilla – for two seasons.

In 2015, Deulofeu left Barcelona and made a permanent switch to the Merseyside club. However, the forward failed to impress for Everton and was allowed to go out on loan to AC Milan in 2017. The La Liga giants re-signed the Spain international from the Premier League club last summer.

Deulofeu’s first team opportunities under Ernesto Valverde was restricted as he made only five starts in the La Liga in the first half of the season. Lack of playing time saw Barcelona allow him to join Watford on loan in January.

Sport say ‘extending the loan is a possibility’ which sounds odd given the player’s contract expires in June 2019. It’s also stated Barcelona can’t demand a big fee for a permanent transfer given Deulofeu’s contract situation, and that player choice will play a big part in what happens next.

The player’s contract at Camp Nou will run down next summer and admitted Watford manager Javi Garcia has urged him to continue at Vicarage Road. 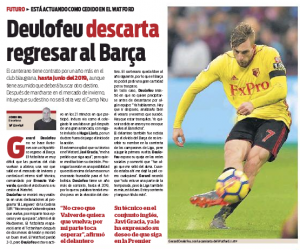 “I do not think I’ll return to Barca. They gave me up and I wanted to go on loan. It’s clear that I don’t think I’ll come back,” Deulofeu told Cadena Ser.

“The coach wants me to stay. I have to see, go slowly and analyse it well. We will see with my agent what happens. At the moment we are calm.”

A failure to cash in on the player in the summer transfer window could force Barcelona to allow Deulofeu leave on a free transfer in 2019.