Enjoying himself in Turkey at Galatasaray following a very prolific season on loan from Swansea City at Marseille, Bafétimbi Gomis has rediscovered what it’s like to have fun on the football pitch.

The former Lyon and Saint-Etienne striker, who left the Swans in the summer for just under £2.5m, has scored 30 goals in 37 games for the Turkish side this season, a far cry from the 17 in 71 appearances he got with the Premier League side.

Hoping he would be able to stay in the south of France after a successful season, Gomis saw Marseille choose Kostas Mitroglou over him, leading to his transfer from the club.

Speaking to So Foot, the former France international explained his decision to leave Lyon back in 2014 to move to Wales to a mid table Premier League side. 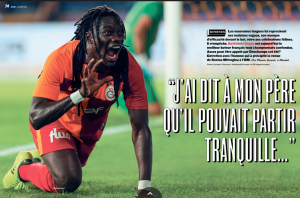 He said: “After five years with Lyon where I never managed to be a constant first-team player, I needed to find game time. It’s true that I could have signed in a more prestigious club, but I would have ended up in the same situation. I therefore chose Swansea, where things didn’t go as they were promised.

“Wilfried Bony didn’t leave, and I found myself on the bench again. Very quickly, something broke between the board and me. I decided to stay at least another year to try and break through, but, in the end, the situation became impossible. The manager was even playing midfielders ahead of me.”

Now 32, Gomis is entering the final stages of his career, although you wouldn’t think that was the case judging by his form, which currently has him as the most prolific French striker in Europe.

Despite that, there’s very little chance of Didier Deschamps considering him for his World Cup squad in Russia.

That being said, until the squad is completely revealed, Gomis will continue to have that very small glimmer of hope.

Who knows? Crazier things have happened in football.