Marouane Fellaini’s relationship with Manchester United fans has been very interesting to follow over the years.

Never becoming a first-team regular at Old Trafford, the Belgium international has had to make do with the odd start and impact sub appearances under José Mourinho, and he’s done that very well, exemplified by his last minute winner against Arsenal at the weekend.

Despite this, the Manchester United faithful have never really clicked with the midfielder, and his latest comments about his contract situation, which have already been well covered, certainly haven’t helped his case.

Asked by Sport/Foot how he felt about the way the fans get on his back, Fellaini said: “It’s happened once. Everyone exaggerates when it comes to this. It was against Tottenham when I came on, a week after I gave away a penalty against Everton. 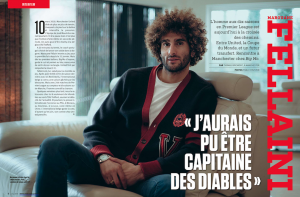 “In the end, I know one thing, and the fans do too: I’ve played an important role in all the trophies the club has won in recent years.”

Speaking of fouls, one aspect of his game that always seems to come up when discussing Fellaini is how often referees blow the whistle when he comes in for a tackle, mostly because of his size, which has led to him being labeled as a ‘brutal’ footballer.

Sport/Foot told him this, explaining the press and many pundits, including Jamie Carragher, were often quick to criticise him for it.

He answered: “How can someone like Jamie Carragher dare to question me? The guy spat from his car on a girl after a Manchester-Liverpool match. You know, critics help you progress, you end up working more, you want to show them they are wrong.”

Out of contract at the end of the season, there’s a high chance this could be Fellaini’s last season at Old Trafford.

Unless José Mourinho gets his way, that is, which he often seems to do.