The first three days of the January transfer window pushed Dani Olmo right into the middle of the circus, something the player himself seems quite happy with.

First it was claimed Barcelona have made an offer, and then it was Chelsea, before Tottenham and Manchester City were also dragged into the equation.

One club was missing though, and that’s Manchester United.

The Old Trafford side have been linked with the Dinamo Zagreb player previously, and given they’re linked with any conceivable target it felt like an omission.

Mundo Deportivo put that right on Friday, reporting Olmo is ‘on the agenda’ of Barcelona, Atletico Madrid, Manchester City, Manchester United, Borussia Dortmund and others.

An attacking midfielder who can play on either side or through the middle, Olmo is a regular provider of goals and assists, something United could do with from their midfield at the moment.

He’s an exciting player and already a full Spain international. Dinamo Zagreb want at least €40m for the player, more than Barca want to pay but not out of United’s reach.

On Thursday he talked up a potential winter transfer, something which didn’t go down well with Barcelona who would prefer ‘more discretion’.

Given Olmo left Barcelona as a child to move to Croatia he’s hardly going to be bullied into line by interest from the Catalan club. He’s made his name elsewhere having left La Masia, and doesn’t need to bend to to the behaviour they dictate. 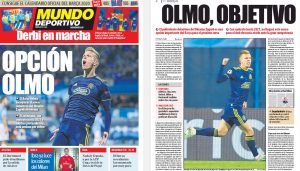 Mundo Deportivo say Barca sources have ‘completely ruled out’ the signing in the winter market, preferring to wait until the summer. Reading between the lines, it appears the Blaugrana would like him to shut up and wait for them.

Given Olmo is tempted by a January move, that could give hope to others.

Olmo could be just what Manchester United need, although their problem may be a lack of Champions League football. It’s worth giving it a go, and he’d likely be cheaper than other options.

Conte ‘insisting a lot’ to Paratici, wants player at Tottenham –...