Everton have been repeatedly linked to Hirving Lozano ever since it was rumoured Marcel Brands would be joining the club. With Brands responsible for taking Lozano to PSV, the Dutchman is clearly a fan of the player and all the more so because he did well after the transfer.

The idea caused excitement in Mexico in April, but now it’s Juventus getting all the attention. A potential move to the Turin club gets the front page of Tuesday’s edition of Record Mexico.

Juventus would be very tough competition for Everton on a number of levels, but the club are linked to so many players right now that they certainly can’t sign them all. Just from those making an impression at the World Cup, there’s Lozano, Aleksandr Golovin and Sergej Milinković-Savić.

Record’s report does have something which may be of interest to Everton. It’s claimed that PSV have told Juventus the base price for a transfer is €35m. 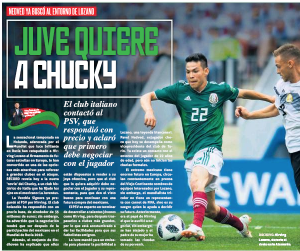 That seems on the low side, but if there is some kind of price set then surely Marcel Brands would know about it.

Brands probably wouldn’t want to upset his former club, but if other sides are set to make swoops then there’s no reason preventing Everton from joining them.