Deciding that he didn’t want to return to Italy, where he’s technically still under contract with Inter Milan, Joao Mario put himself on the market after spending the second half of the season on loan at West Ham.

While the Hammers don’t seem particularly interested in trying to make his stay in the Premier League permanent, Tottenham, according to Corriere dello Sport, are.

The Portugal midfielder is said to be ‘rated’ by Mauricio Pochettino, who believes he would work well in his 4-2-3-1 formation at Wembley next season, but the price tag might end up putting them off.

Having originally spent around €45m (bonuses included) for the former Sporting CP star, Inter believe a fee of €32-35m would see them cut their losses without losing too much money. 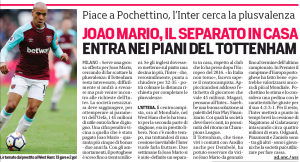 Both Tottenham and Inter have held talks recently, but they’ve mostly been about Mousa Dembélé, who has been targeted by Luciano Spalletti to help bolster his midfield.

Much like Joao Mario, the Belgian is currently with his national team in Russia, and it seems unlikely we’ll see any real progress in either story while that remains the case.

Until then, everyone can have fun speculating.