At the weekend Hirving Lozano, known as Chucky in his own country, was linked with a move to Everton by an English tabloid.

The gist was that if Marcel Brands moves to the club from PSV then he’ll obviously want to take the Mexican with him, given he helped identify him for the Dutch club.

There may be something in that, Brands is obviously a fan, but it’s a big leap to the assumption, and the Dutchman may even be reluctant to raid his old club if he arrives at Everton this summer.

Despite that, it’s certainly catching attention in Mexico, where they’ve been eager for a long time for the attacker to move to the Premier League. It’s across a whole bunch of Mexican newspapers on Tuesday, showing there’d be some excitement if Everton actually do make a move.

El Mundo de Cordoba even have it on their front page, with a bigger feature inside. 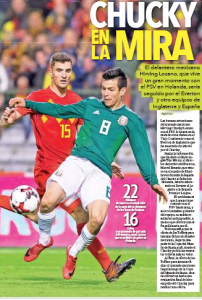 Everton fans shouldn’t be surprised if this now escalates into something it isn’t.

Lozano has weakly been linked to all of Manchester United, Manchester City and Arsenal previously, and very soon there were Mexican claims of a deal being close, the English media then taking it as a done deal… and nothing ever happening.

If something does happen, and there’s a lot of hurdles in the way, then Everton could rely on the Mexican media to really get behind the move.