Everton owned goalkeeper João Virgínia, currently on loan at Reading, gave a press conference in Portugal on Tuesday. The player is part of the U21 squad which will be facing Slovenia and Norway in their next couple of games.

Virginia has been playing in England since he was 15, so there’s a special feeling for him to go back to his home country and represent their people.

In quotes covered by A Bola, he’s spoken about the ‘huge happiness’ of playing for Portugal, as they have ‘two games to win’ in the current break.

The most interesting quotes were about his ability with his feet, with the goalkeeper explaining that playing in a different position in the past has helped him with his skills.

“I started playing in attack when I was six. Then I stopped playing football and when I came back I went to goal. It was at school, I was tall, I had good reflexes and I started to enjoy being in goal.

“Playing in the attack gave me a foot-game, fundamental to what is expected today of a goalkeeper. And I play well and easily with both feet.” 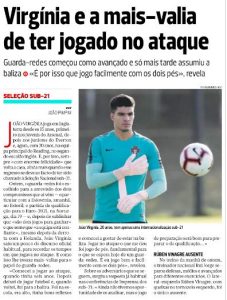 Virgínia has a contract with Everton until June 2021, and his Reading loan lasts until the end of the current season.

He even started the season with a place in the team, but after conceding five goals in the first two Championship matches, he ended up being sent to the bench, and hasn’t played in the competition again.

Last month, he made an appearance in Reading’s elimination to Wolves in the EFL Cup.