It wouldn’t be a busy transfer day in Italy without at least one story about Kalidou Koulibaly, right?

Well, rest assured, there is something about the Napoli centre-back, and it involves both Manchester United and Manchester City.

They are two out of a very select group of clubs capable of affording Aurelio de Laurentiis’ demands for his star centre-back, which currently stand at €150m (a release clause).

It’s pointed out the Napoli owner has already turned away £108m from Ole Gunnar Solskjaer’s side for the Senegal international, and there’s a chance Manchester City getting involved could make things even more uncomfortable for him.

According to Corriere dello Sport, Koulibaly has been highlighted by Pep Guardiola as the ‘strongest “Italian” defender’, and considering lack of depth the Spaniard has had to deal with at centre-back this season, strengthening that area with more bodies makes sense. 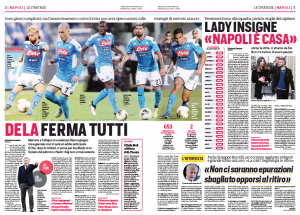 As for Manchester United, they spent heavily on Harry Maguire in the summer, but there is a feeling there might be a need for an extra man to add more quality, as Solskjaer has yet to settle on the England international’s long-term partner.

Furthermore, if he continues to play three at the back in some games, the more depth, the better.

Either way, both clubs know the price, so it’s €150m or nothing, and Aurelio de Laurentiis has a feeling he might get his money at some point, previously stating he would one day be ‘forced to sell’ his beloved defender.