Now with the January window out of the way, and in some cases best forgotten about, clubs are already looking towards the summer and getting their targets in order.

At this stage the plan will be to identify those wanted and get in there when the market opens, ahead of the World Cup, so everything is well organised and there’s no last minute rush.

Of course, it often doesn’t work out that way, but Everton and West Ham scouts are doing their best to get the reports in.

Manchester United attend every big Portuguese match, so there’s no special significance there, and Liverpool will be scouting Porto ahead of their Champions League match.

Everton and West Ham send officials to watch Portuguese matches a few times a year, and watching Porto beat Braga 3-1 will have given a good chance to see shared targets. 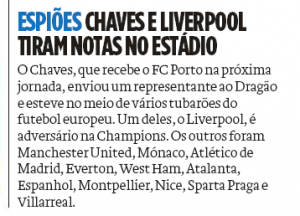 Yacine Brahimi has been strongly linked to both clubs in recent years and was one of Porto’s better performers, playing on the left wing. Vincent Aboubakar has also been linked with both Everton and West Ham, and the striker scored Porto’s third goal.

Man of the Match for O Jogo was Alex Telles at left back, who has been weakly linked to Everton, and whose agent told Sport Witness last year that a move to Chelsea could be on the cards after previous attempts from the London club.