The Portuguese media are convinced Arsenal are keen on Benfica’s Andrija Zivkovic.

Zivkovic, 21 years of age, moved to Benfica during the summer 2016 transfer window, and was linked with Arsenal when he was at Partizan Belgrade.

In February 2017 it was claimed in Portugal that Arsenal had sent officials to a match to watch Zivkovic in action.

Then it June it was reported Arsenal had sent scouts to watch the winger at the Euro U21 championship in Poland.

After that Arsenal were said to running their eye over the player as Benfica played Manchester United, and then in December the club had an official back in Portugal and similar claims were made. 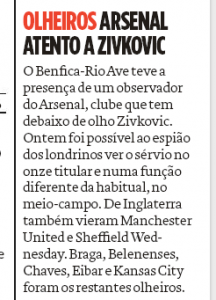 Arsenal had someone watch Benfica beat Rio Ave 5-1 on Saturday, and Sunday’s edition of O Jogo has a small report, again stating Zivkovic is the target.

The Portuguese newspaper say Arsenal will have been able to watch the player in a different role, as he played in midfield rather than on the wing.

The youngster was one of Benfica’s better performers, and if claims of Arsenal interest are correct then it will have been a tick in the scouting book.

Whether it was Zivkovic who was the object of Arsenal’s attention or not, the club continue to look at Portugal for possible recruits ahead of the summer.