This week’s edition of SportBild has a feature on possible summer transfers involving Bundesliga players.

Proving that transfer rumours never really stop, SportBild present a series of players, the clubs interested in signing them, and the potential price a deal may be done at.

Thorgan Hazard is one of the men in the frame, and it’s claimed Leicester City are keen and look at the Belgian as a possible successor to Riyad Mahrez, should he get his wish to move away in the summer.

Chelsea have an option which means they can match any offer received for Hazard, negotiated when they sold Eden’s younger brother to the German side, and that’s presented as a possibility. 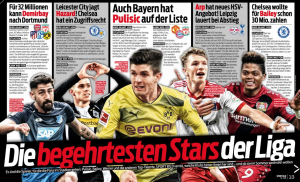 Max Eberl consider a sale, he’d be ‘weak’ when faced with such an amount.

Thorgan Hazard is primarily a left winger, but can also play through the middle as an attacking midfielder.

The 24 year old moved from Chelsea in 2015 on a permanent deal, having initially been on loan. Leicester have been linked with the player on and off for a couple of years.