Portuguese side Sporting continue their pursuit for Famalicão midfielder Manuel Ugarte, who’s now said to be ‘close’ to complete the move to the Lions.

However, according to newspaper Correio da Manhã, the Lisbon side are waiting for another transfer before they can complete the signing: the one of Matheus Nunes to Everton.

It’s been a few months since the Toffees started being linked to the player, and at some stage, it was claimed the clubs were nearing an agreement of around €18m.

Correio da Manhã now claims that the move is pending the approval of Everton’s new manager Rafa Benitez, who is currently in his first weeks in charge of the club. 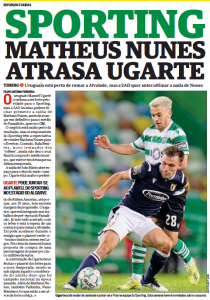 When speaking to sources close to the situation, Sport Witness had already learned that the transfer would have an easier path had Everton signed manager Nuno Espírito Santo, since both negotiations had the participation of Gestifute.

The rumour went completely quiet after Tottenham Hotspur announced the signing of the former Wolverhampton Wanderers boss, and now it looks like Benitez is the one taking things slowly before allowing the purchase of a player who was already being negotiated prior to his arrival.