Just last week, it was reported that Liverpool were looking at Federico Chiesa to potentially bolster their attack.

The Italian was the star of the show for a large chunk of his country’s run to winning the Euros, and his constant running at defenders caused large problems for defences, including England’s on Sunday night.

However, there is another player who made a name for himself on a slightly bigger stage than he is used to, and that was Domenico Berardi, currently at Sassuolo.

Already targeted by Leicester City, the winger is, according to Corriere dello Sport, also in the Reds’ transfer shortlist, as the newspaper explain ‘his agent received a certificate of esteem from Liverpool’, who are ‘ready to join the auction’. 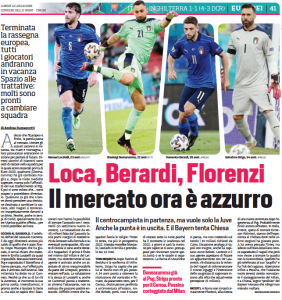 The 26-year-old appears ready to make the leap to a bigger club, and his two assists at the Euros in six appearances are a testament to that.

As for his price, they reckon it’s about the same as Manuel Locatelli’s, who is valued at €40-45m by his club.

That’s affordable for a club of Liverpool’s stature, and about half of what Juventus would likely ask for Federico Chiesa, if the latest report on the matter is to be believed.