Over the past week or so, we’ve been keeping an eye on Valencia’s interest in Everton’s Sandro Ramirez, with the La Liga club making the former Malaga forward their priority for the January transfer window.

The fact Sport, Mundo Deportivo, Plaza Deportiva, Marca and now Super Deporte have all reported the story separately from each other suggests there’s something behind it, and the latter on the list make a big deal of it by putting the story on their front page on Tuesday.

As has been reported previously, a meeting took place last week between the Valencia board, with the Everton forward heavily discussed and a plan of action to get their man drawn out.

Super Deporte state the most viable option for now would be for the La Liga side to get Sandro on a loan with a view to buy, with the Toffees paying a chunk of his rather expensive wages.

Unable to cover the €6m/year the Spaniard is said to be earning, Valencia are also having to wait and see how the 22-year-old fares under Sam Allardyce. 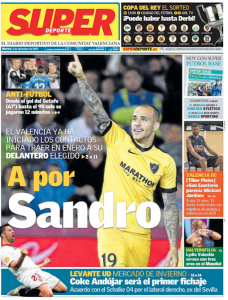 When the interest started, Sandro was barely being used by Ronald Koeman, yet with a managerial change, his situation could improve and Everton might not be interested in letting him go.

Super Deporte also relay Valencia’s manager, Marcelino, who recently admitted he was a fan of the player, before quickly stating he didn’t want to talk about players that weren’t under his supervision.

At this stage, it’s quite simply: the La Liga side want Sandro, and talks are already underway to try and get something done.

There are a lot of hurdles along the way, but there’s an air of confidence something could get done.

It mostly depends on Sam Allardyce, though.