It seems Everton to Everton is still a thing.

It had been a long time since the Toffees were last linked to the Brazilian winger. Despite a long chase, a bid for the player was never made, and the rumour slowly disappeared.

But this story is back in an article from Portuguese newspaper A Bola today, where they report Benfica’s efforts to sign the Grêmio star.

The outlet claims that one of the difficulties the Eagles would have for this signing is that Everton have ‘joined the race’ for Everton Cebolinha. 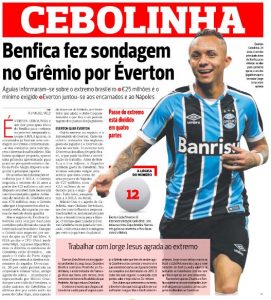 They claim that Carlo Ancelotti likes the player, and since Everton has 12 caps for the Brazilian national team, that would make things easier for him to get a work permit from the FA.

That’s all they have to say about the Toffees, and it’s really Benfica who seem the strongest competitors to land the winger now.

The Eagles have just signed manager Jorge Jesus, who had been working in Brazil and suggested signing of the 24-year-old. A Bola claims that Grêmio will demand at least €25m for the player.

It doesn’t sound impossible that Everton would make a new effort for the signing of Everton Cebolinha, but considering how quiet this rumour has gone in the past months, it looks unlikely now.