Valencia remain keen on a move for Manchester City midfielder Yangel Herrera and plan to start negotiations once a deal for winger Ferran Torres is finalised.

That’s according to Super Deporte, who say the deal for the forward is in the final stages, and the two clubs are working through the final ‘bureaucratic loopholes’ to get it over the line.

Once they have done so, they will move onto a deal for Herrera, with the Spanish side having registered their interest some time ago.

The newspaper explains that during negotiations for Torres, Manchester City proposed Herrera be part of the deal given Valencia had contacted them weeks before to ask about his situation.

However, Valencia chief Peter Lim rejected this outright, insisting that any deal for Torres be a simple cash transaction without players.

That is something they finally found an agreement on – €25m plus variables taking it to €30m – and now the focus has turned to Herrera.

The Spanish side are keen to take the midfielder on loan this season, having watched the player on loan at Granada this year, and include a purchase option for next summer.

So far the two clubs have not agreed what price that purchase option would be, but Super Deporte have learned of an estimate.

According to their information when, Manchester City proposed Herrera be a part of the deal for Torres they were valuing him at €15-20m and so it is logical to assume they would ask for a similar price for the buy option. 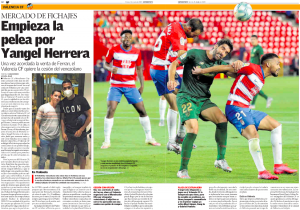 However, there is a significant obstacle to be overcome before any deal can be completed, and that is to do with the midfielder’s work permit.

Herrera is Venezuelan so would take up one of the three non-EU spaces in Valencia’s squad, but all three of them are currently filled by Uruguayan Maxi Gomez, the Korean Kan In Lee and the Brazilian Gabriel Paulista.

Paulista, though, has indicated he wants to play for the Spanish National Team and take up dual residency to do so.

That is a process he has already started, and his representatives indicated a few weeks ago that things were going well.

They hoped that it could be sorted within a month, but it remains to be seen what impact the Coronavirus outbreak has had on things.

If there is any delay that is likely to hold up Herrera’s arrival from Manchester City, with Valencia unable to take him until they have opened up the space in their squad.