The Spanish media cannot sound surer that Lucas Digne is signing for Everton.

Both Catalan newspapers reported it as almost a done deal on Saturday, and Sunday carries on with similar claims.

Sport says Digne has given the ‘ok’ to move to Everton, having initially delayed doing so because he was expecting offers from elsewhere.

Mundo Deportivo have it slightly differently and claim the Frenchman’s transfer to Goodison Park is ‘already a fact’ and the only reason it hasn’t been formalised is Everton trying to make it a double deal with Yerry Mina.

According to the claims, Barcelona want the two potential transfers treating completely independently, and whilst they’re happy to continue talks for the Colombian defender they want the Digne deal doing first. 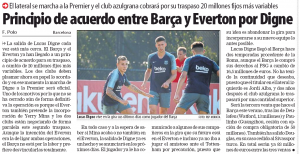 The Frenchman is said to have already told some of his teammate he’s signing for Everton, and now Barca have made it clear they won’t work on a double deal, the announcement will be ‘in the comings days’.

Mundo Deportivo believe an ‘agreement in principle’ was reached at €20m plus bonuses.