On July 26th we covered claims from Brazil that Chelsea are now the favourites to sign Bernard.

The Brazilian’s contract ran out with Shakhtar Donetsk this summer and he’s therefore available as a free agent. That doesn’t mean he’s going to be completely free and the Brazilian’s agents will be looking for high wages and a matching signing-on fee.

On July 27th it was reported that Bernard’s agents were in London to hold talks with Chelsea. That was said to be the player’s preferred destination, partly because he likes the idea of living in the English capital.

Sunday’s edition of Tuttosport brings AC Milan into the equation.

The Serie A club want Bernard too but Chelsea can ‘put a spoke in the wheel’ and ruin things for Milan. Tuttosport again point out that two clubs are seeing their transfer paths 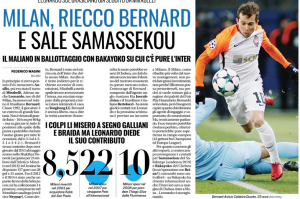 Agents Kia Joorabchian and Giuliano Bertolucci are both involved and have been in contact with Milan, but then both men have good connections with Chelsea too.