Admitting he had a number of offers on the table to leave Paris Saint-Germain in the summer, Thomas Meunier also stated he wouldn’t mind staying in France for an extra year.

The Belgian defender has been very open about his love for Manchester United, who desperately need a right-back, yet Sport/Foot in Belgium believe Everton have made the biggest step out of all the Premier League clubs.

According to the magazine, the Toffees have ‘already met’ the player’s agent, most likely with an aim to find out the terms wanted by the defender to then make him an offer.

However, Sport/Foot reiterate Meunier’s ‘ultimate dream’ remains a transfer to Manchester United, although there is the worry he could find himself behind a ‘world class’ defender once more should the Red Devils really double down on the position. 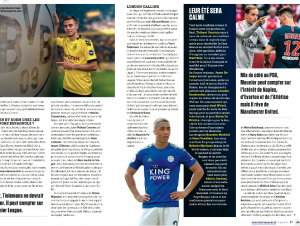 It’s fair to say he would likely start under Marco Silva, and the Belgium international has already spoken about a potential move to Goodison Park in the past, hinting it could be the kind of move he makes to help his career.

The 27-year-old made 31 appearances in all competitions under Thomas Tuchel last year, scoring five goals and picking up seven assists.