In the past week, we’ve seen several reports in the Portuguese press saying André Almeida is set to renew his contract with Benfica.

That’s why it was a little surprising to see several Premier League sides being linked to the player in the past couple of days.

The English press has been claiming Brighton, Everton, Leicester City, Southampton and Wolves would all be interested in signing the right-back, and the reports are covered by the Portuguese media today.

However, newspaper O Jogo brings a take on the situation which could frustrate the plans of all these English sides who are keen on the 28-year-old. 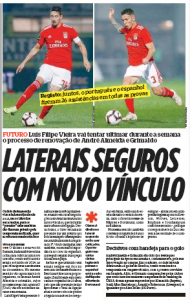 O Jogo writes that Benfica’s fullbacks are ‘safe’ with a ‘new bond’. Even though the renewals haven’t been signed, they are set to be discussed and ‘accelerated’ this week.

Even though Almeida is still to agree to the three-year extension, O Jogo makes it pretty clear he’s not leaving, saying he ‘has already seen the possibility of emigrating cut’.

The English interest is even mentioned as a reason Benfica will push for his stay. That probably means a big pay rise or a signing bonus.

It’s usual for Everton, Leicester and Wolves to be linked with Portugal based players, but this time there doesn’t appear a lot in it.