Premier League side Southampton are interested in the Benfica striker Haris Seferovic, according to the Portuguese media today.

Newspaper Record claims the Saints have the Swiss striker on a list of attackers who the club intend to sign in the summer.

Seferovic was about to leave Benfica at the start of the season, with the Eagles not making it very difficult for the clubs who wanted him.

However, due to Jonas’ injuries, he ended up staying at the club, and led the Lisbon side to a league title, being top scorer with 23 goals. 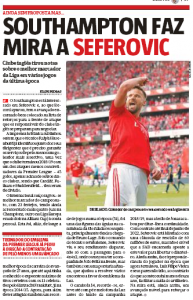 That’s why, according to Record, Benfica are acting differently this time, since the player’s status has changed a lot in the past 12 months.

The good news is the Eagles would still accept to negotiate, and are unlikely to use his €60m release clause as a reference.

Haris Seferovic finished the season with 27 goals and 9 assists in 51 matches. This was by far the 27-year-old’s best season in his career.