Home Europe Everton and Leicester both want same player this month, loan and then...
SHARE

Sunday’s edition of A Bola claims Leicester City and Everton are both keen on signing Rafa Silva before the end of the month.

Silva hasn’t impressed enough since his move from Braga to Benfica, and a loan was talked up ahead of the January window. Benfica were said to be looking for interest in England, and that led to assumptions over Wolves interest, given the Championship’s clubs previous business in Portugal.

Things went quiet, and now it’s Leicester and Everton in the picture. A Bola states Benfica would listen to the clubs over a January loan, and it’s stated the Premier League sides may soon come forward with offers for the player. 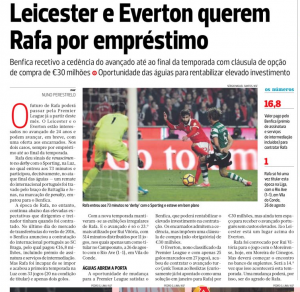 Benfica would look to have a €30m purchase option at the end of a loan to either Leicester or Everton, although that wouldn’t be mandatory. The figure seems a little high, considering Benfica paid just over half of that and haven’t been impressed.

But with a clause not being mandatory, it wouldn’t be a huge concern for English sides.