Readying themselves to lose Romelu Lukaku (most likely to Chelsea) in the summer, Everton are shopping around for strikers to replace the departing Belgian.

Linked with a few so far, one rather interesting target has popped up over the past few days in Sassuolo’s Diego Falcinelli.

The 25-year-old did well last season on loan at Crotone, scoring 13 goals in 36 appearances as well as picking up two assists, and has apparently caught the eye of the Toffees for next season.

Gazzetta dello Sport explain that, on top of Ronald Koeman, Torino are interested in the striker’s profile, with the Serie A club seemingly preparing themselves for offers for Andrea Belotti.

No fee is mentioned in the article, but with three years left on his contract with Sassuolo, and a good season under his belt, they could be looking to make a nice little profit on him. 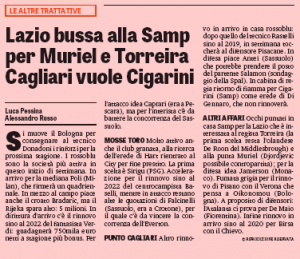 Standing at 6’2”, good in the air and possessing a strong left foot, Falcinelli certainly has the profile to replace Lukaku, and with 13 goals in a team that finished 18th in Serie A, better players around him would certainly help him find the back of the net more.

One to keep an eye on, especially since he picked up his first cap for Italy just over a week ago.