Everton need to sign a new defensive midfielder this summer.

The Toffees allowed Morgan Schneiderlin to join OGC Nice and will be without the services of Jean-Philippe Gbamin for most of this year.

Muhamed Bešić, who spent the last two seasons out on loan at Middlesbrough and Sheffield United, is the only other option in the defensive midfield position.

The Spanish side have been relegated from La Liga and they need to reduce their wage bill by parting ways with a few of their players. These sales will also help the Catalan club add to the squad for next season.

Roca was part of the Spain U21 side which won the European championship last summer and a year later, he saw his boyhood club drop down to the second division. However, 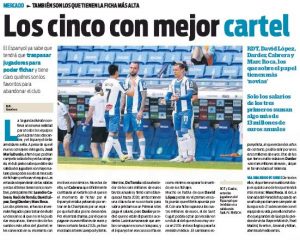 that’s not stopped the midfielder from drawing attention.

Sport say Carlo Ancelotti’s side along with Arsenal, Real Madrid, Bayern Munich and AC Milan are ‘attentive’ of Roca’s situation at Espanyol.