Andre Gomes has no future at Barcelona and will be offloaded in the summer transfer window.

The Portugal international impressed during his season-long loan spell at Everton and Marco Silva has publicly expressed his desire to sign his compatriot on a permanent transfer.

Over the past few days, reports coming out of the Catalan media suggested the Toffees are leading the race for his signature.

The La Liga winners were demanding €30m plus for the former Valencia man, which the Merseyside club were unwilling to meet.

That changed as Mundo Deportivo reported on Tuesday that Barca agreed a €25m fee with the English club for the sale of Gomes.

Wednesday’s edition of Sport also claims Everton have found an agreement with the Spanish champions, despite claimed interest from Tottenham Hotspur and West Ham United.

The fee agreed is €25m and now Gomes has to negotiate salary and the conditions of the contract to ‘close the operation definitively’. 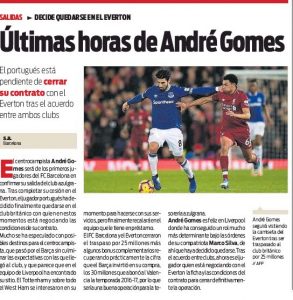 That’s in contrast to what Mundo said, as they reported everything between Gomes and Everton was already sorted out.

Out of the two, we’d probably side with Mundo Deportivo.