Two days ago, Paris Saint-Germain president Nasser al-Khelaïfi told France Football that no one forced Neymar to sign for the club and he only wants players at Parc des Princes who are ready to defend the honour of the Ligue 1 winners.

The Brazil international left Barcelona for PSG in 2017 and is linked with a return to the Camp Nou in the summer transfer window.

A ‘Top Secret’ report from Mundo Deportivo claims the forward has already sent a message to Al-Khelaifi, which is splashed on the front page of the Catalan newspaper.

The message reads: “I do not want to play here anymore, I want to go back to my home, where I should never have left.”

The 27-year-old is said to have asked Al-Khelaifi to sanction his sale as he has no plans to continue with the Paris club. His dream is to rejoin the La Liga winners and he regrets the decision to leave Barca.

Mundo claims the player sent the message to Al-Khelaifi before the latter gave an interview to France Football, which is why PSG’s stance regarding the former Santos star has changed. 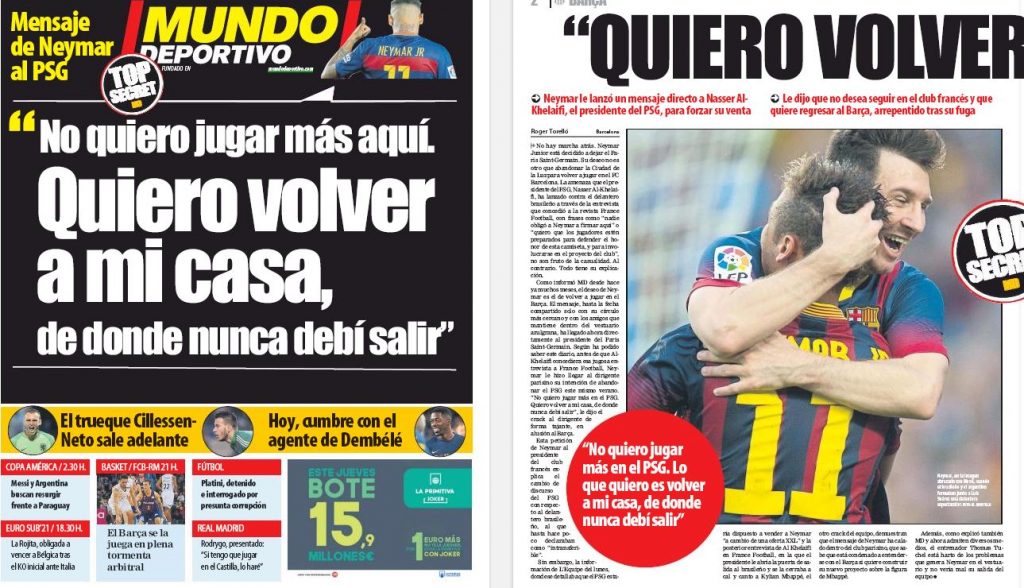 The South American’s desire was to play for the Blaugrana once again and the message, which was earlier shared with his close friends inside the Camp Nou dressing room, has been sent to Al-Khelaifi.

PSG coach Thomas Tuchel is also fed up with the problems created by Neymar in the dressing room and would not block his exit.

It’s to be noted here that Mundo’s ‘Top Secret’ report only claims that Neymar has asked to leave PSG for Barcelona.

There is nothing to suggest whether or not Ernesto Valverde’s side will make an approach for him and if so, what would be the cost of the operation.

Another Catalan newspaper, Sport, claims the Barcelona dressing room has said ‘yes’ for the club to re-sign the attacker this summer.

The players will welcome the PSG star with ‘open arms’ and several of them have already called Neymar to encourage him to join the club once again.

Since leaving Camp Nou 2017, Neymar has made several trips to Barcelona and has been in touch with players from his former club.

Sport states Neymar will put Barca ahead of any other club (Real Madrid for example) and his arrival would further improve their quality in the attacking division.

It’s to be noted here that neither the Mundo or Sport reports claimed Barcelona will make an approach for him and even if they do, there is no mention of what would be the cost of the operation.