Home Championship “Don’t know what you’re talking about” – Haaland distances himself from being...
SHARE

It’s something endless articles about the Borussia Dortmund player have mentioned over the past year, and it’s also been claimed he’s a Leeds United supporter.

Given his father Alfe-Inge played for the Elland Road club, it’s hardly controversial if the young striker has a soft spot for the Whites.

Back in February 2017, Haaland, who was then just 16 years of age, volunteered information about his feelings for the club when speaking to the Norwegian media.

Aftenposten quoted him as saying: “I want to be the best possible. The dream is to win the Premier League with Leeds. In addition, the goal is to become a better player than my dad was. I hope to get more caps than he did.”

A move to Red Bull Salzburg and the player’s progression on the pitch made signing for the Championship club very unlikely. He switched to Borussia Dortmund in the winter market and has a remarkable scoring record so far.

Speaking to France Football, Haaland has been asked if he’s still a Leeds United fan, to which he replied: “I don’t know what you’re talking about.” 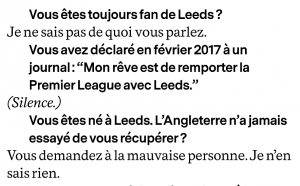 The French magazine then reminded the 19 year old of his comments from 2017, but he refused to respond, sitting in silence after the question was asked.

For whatever reason, Europe’s latest football sensation doesn’t seem quite so keen to talk about Leeds United these days.