Currently without Kieran Tierney and Sead Kolašinać because of injury, Mikel Arteta is having to use Bukayo Saka at left-back.

That isn’t the youngster’s natural position, and these problems with the position appear to have led the Spaniard to consider a move for another player.

Over the January transfer window, it was reported the Gunners were trying to sign Layvin Kurzawa from Paris Saint-Germain, and while it didn’t happen then, the Frenchman is out of contract in the summer and remains completely available.

With that in mind, it’s no surprise to see claims Arsenal are still interested in the player, as France Football report as much in their weekly magazine. 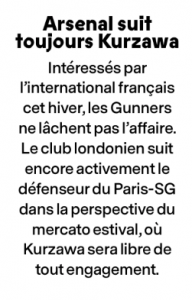 They state the London club ‘aren’t letting go of the situation’ and are still ‘actively following’ the defender with a view to the summer window.

It will be interesting to see if a move is made between now and the end of the season, and if Kurzawa does transfer to the Emirates, what will be done with Kolašinać as it seems unlikely Tierney, bought for over £24m, will be going anywhere in the summer.