Manchester City star Kevin De Bruyne will be out of action for four to six weeks after going off injured in his side’s midweek league win over Aston Villa.

This was confirmed by Pep Guardiola in his pre-match press conference on Friday and he also hinted blame at the fixture pile up for the midfielder’s latest setback.

Het Belang van Limburg have covered the Citizens manager’s comments on the Belgium international in today’s edition of the newspaper.

The former Chelsea man’s injury situation is also closely followed by the national team, who in recent times have seen several of their players pick up various injuries.

In addition to this, the Covid-19 situation is also to be taken into account as the global pandemic has had a huge impact on the fixture congestion, both with club and country. The current situation hasn’t pleased Belgium national team doctor Kristof Sas.

He said: “I have already expressed my concern about that. I don’t want to throw a stone at organisations like UEFA or FIFA. I do understand that in this economic context it is important to complete the competitions. But players have had less preparation and the burden is now heavier. And that leads to more injuries.”

Sas, however, is not really concerned about De Bruyne’s injury as he believes the break will only be beneficial for the Manchester City star. 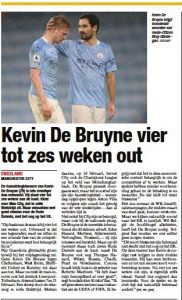 “These kinds of injuries are not bad at all in view of the European Championship. In this way, Kevin can get the necessary rest in these busy months,” Sas explained.

“He can recharge for a while and arrive at a new kind of preparation. Being out for four to six weeks is actually ideal. At least from our point of view. It is of course completely different for the player and the club.”